Fudge it.  That’s my advice if you want to run the 12K Bay to Breakers next year. If you run a 10 minute mile, register as a 6 minute miler to get as close to the front as possible (why’s that middle-aged white dude up front with the Kenyans?).  Otherwise if you start in your correct corral like we did, you will spend the first 4 miles dodging and weaving walkers, stoppers and stumblers.  My preview post estimated 10,000 runners.  That was correct–but there were actually 40,000 registered participants (and another estimated 60,000 bandits), of which only about 10% actually ran. 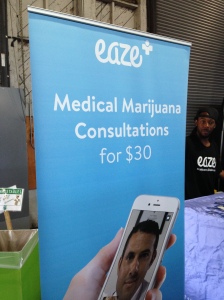 The weekend Runners’ Expo had Clif Bars, compression socks and other goods and services catering to the regional interests of the athletes.

We grabbed the Bauer’s IT Shuttle from the Millbrae Park and Ride near SFO at 6:15 a.m. Sunday arriving at the start area around 7:00 a.m.  The run was scheduled to start at 8:20 a.m. for those in Corral C.   With 1:20:00 until the starting gun, we roamed the Streets of San Francisco in our cheap Wal-Mart sweats looking like homeless (housing challenged?) people. We fit right in.

We expected the weather to be drizzly and cold, so had the extra layer of cheap sweats over our usual running attire.  It was about 60 degrees, but sunny–about as good as one could expect for SF in May.  Recall what Mark Twain said about Summer in SF.  We grabbed a table at a Starbucks next to our Corral to watch the parade of Pokémen, 80’s exercise performers, felt bananas, Trump Wall sections, Wonderwomen and other out of shape super heroes.  Waldo was spotted everywhere.  Tortilla tossing is a pre-start thing at the B2B.  Fortunately, the projectiles were the softer flour variety, not the dangerous buzz-saw edged corn ones.

The gun for the elites sounded at 8:00 a.m.  That was our cue to shed and toss our outer Wal-Mart attire.   The race was won by a runner from Texas (take that California) in just over 35 minutes. That was about the time that S and I were 2 miles in, approaching the notorious Hayes Hill.  S and I ran together at an 11 minute pace for the first 2 miles, dodging and weaving the many extraordinary Corral A and B “runners”.  Note to self: incorporate path blocking stationary objects into our training.

At the Hayes Hill, S and I separated as I attacked at an aggressive 10 minute pace and S slowed.  After all the build-up to the notorious Hayes Hill, my professional opinion is that it was not as bad as I thought it would be. Yes, it is steep and a good 80% walked it, but it comes early in the run, and the forced slow pace leading up to it means one is barely winded when approaching.  I consider the Santa Barbara corkscrew more difficult, as was the Austin Crusher (inasmuch as it is 11 miles into the Austin Half). 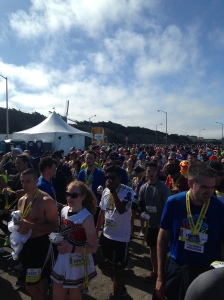 After the Hayes Hill, the course is essentially downhill.  I’d estimate that I passed 10  participants for every 1 that passed me.  It was not until mile 5 that a majority of the crowd around me was actually running.   But then, around mile 8, clots of walkers again appeared–perhaps fatigued runners who did not pace.  The chute into the finish area was abrupt. Take a right turn on the west side of Golden Gate Park, and there it was.  Crowd support along the route was sporadic, but vocal–sporadic probably because most of those who would otherwise be spectators were in Halloween costumes taking selfies in our running path.

Overall, our times were comparable to our extrapolated 10K and Half times, but our rankings were better than normal. So that’s the upside to racing against 20,000 runners who have little interest in running. M (Division top 25%) and S (Division top 12%) results:

If you want a run where running is optional but having fun is not, then try the B2B.

Them’s the Breakers (at the finish line). 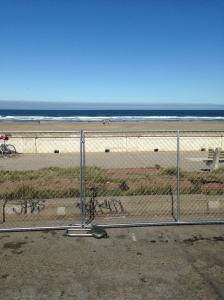 Between the two of us, we are proud parents, Texans, Texas Exes, long distance runners, cyclists, adventurers, a guitar player, a computer programmer, a great cook, a lawyer, an engineer, a physicist, etc. etc.
View all posts by winnebago70x →
This entry was posted in 10K Runs, California, Runs and tagged 10K Runs, California. Bookmark the permalink.