The Cruelest Half Marathon 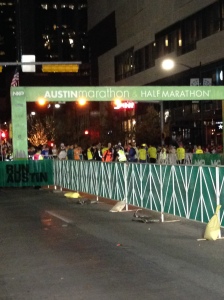 The Austin Half Marathon is one brutal course.  Sunday, Valentines Day 2016, started at 5:15 a.m. with a quick trip to Starbucks for a caffeine jolt before we walked across the Congress Avenue Bridge for the 7 a.m. start.  That morning, we cajoled the front desk at the hotel out a couple of industrial size garbage bags, into which we promptly tore head holes to use as disposable windbreakers.  The chilly runners at the start envied us. It’s a race–and we were already getting into our competitors’ heads. 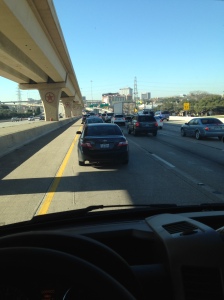 Traffic out of Dallas on Friday was bumpers cars from Plano to downtown, but once the Conestoga was past downtown Dallas, headed west across I-20 to I-35, we were finally able to open up all 188 diesel powered horses, making it to the Temple, Texas Bucees by 12:30 p.m. 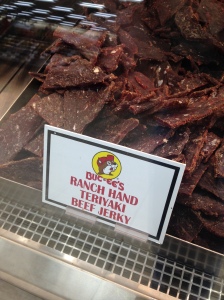 We made it to Austin by early afternoon where we continued the Tex-Mex carb loading at Lupe Tortilla’s, a Houston chain slowly making its way across Texas. Puffy Tacos re-puff in the stomach, I learned. Ugh. 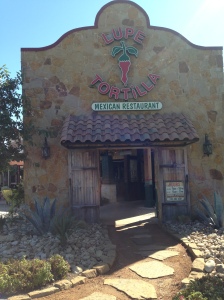 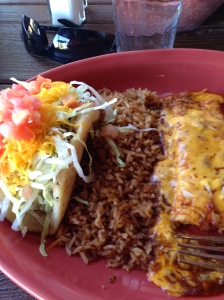 Based on Official ERA70X cheese enchilada metrics, Lupe Tortilla has moved into 4th place on the list of best Texas cheese enchiladas.  After lunch, we headed down MoPac toward the Austin Marathon festivities.  We were fortunate to be able to park the Conestoga in the Service Yard at the Palmer Auditorium, site of the Austin Marathon Expo. Thank goodness for 14 foot clearances. 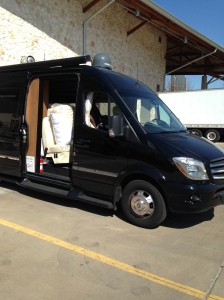 We’ve been to quite a few races and the Austin Expo remains one of the best.  Lots of vendors, easy bib pickup, but still a tough parking situation around Barton Springs for those arriving in cars.

The week prior to the run, we stayed fairly close to the Hal Higdon plan, tapering with runs of 6 miles (Sun), 4 miles (Mon), 2 miles (Wed), then a 2 mile run around Austin’s Town Lake on Friday. Friday night was spent watching the drunks and lunatics on 6th Street. And live music at Darwin’s Pub.  Saturday was a rest day.

Sunday morning, sunrise start.  15,000 total runners: 5,000 Full Marathoners, 9,000 Half Marathoners, and 1,000 in the 5K.  Weather was partly cloudy, turning overcast, 55 degrees, winds from the South at 11 mph.  The run started on time, at Congress at 2nd street, headed south, into the wind, with a slow, steady climb from the Colorado River up to Ben White Blvd for miles 0-3.

This is a crowded run, so darting and dodging was a regular part of the run up and past the 5 mile mark, which, by the way, was the first mile marker I noticed.  I took that as a good omen as mentally, I felt as if I had only run about 3 miles.  I make it a point not to look at the Garmin when I run.  Constantly watching the watch tends to make long runs seem a lot longer.  Once the runners top Congress Avenue, there is a right turn, about a half a mile sprint across Ben White, running west to First Street, where the route turns right, headed back downstream with a rolling decline back to the Colorado River.  The steady run back to the River is a good time to “rest” as all one need to do is slightly tense the leg muscles to act as a brake, then let gravity take over. Just watch out for road discontinuities.

Volunteer and crowd support, was good, as always at this run.  After about 7 miles, one arrives back at the River (ok, Town Lake) where the crowd,  now several lines deep, is loud and boisterous.  At the far end of the First Street Bridge, just South of downtown, the route turns left, headed West along the River to mile 8.  The smell of Sunday morning marijuana permeated this part of the route. At mile 7 or so, a huge sticker on the pavement from BBVA Bank tells runners to “Dare to be Yourself”.  Um, ok. Do we have a choice? If so, I’d rather be one of the elite runners who can run 26.2 miles in the time it takes us to run half that.

At mile 8, the course, which to this point has been relatively tame, gets incredibly tough, with what feels to be an almost vertical climb from 85 feet to 185 feet over about 100 feet horizontal.  Now even walking this hill is rough after a leisurely stroll by the River, but try it after running 8 miles.  It is here where one’s pace takes a hit, and the runners who have not properly Tex-Mex loaded become very noticeable.  They are now walking. After cresting the first hill, then you have a series of gradually increasing rolling hills to mile 12, where one is faced with the granddaddy of all half marathon hills.  The Crusher.  125 feet of elevation over maybe 100 feet.  It approaches a vertical asymptote. As you approach it on Enfield, it comes into view, taunting you. Here, the crowds gather with their signs of inspiration and Caffe Lattes, exhorting the runners.  “You can do this!”  The signs: “Run like [insert gender specific actor/actress] is ahead of you and a creep is behind you” and  “Hit here for Power!”

At the Crusher, it is no longer physical, it is all mental.  Even with the crowd support, the Crusher destroys the will of maybe 40% of the runners, who, perhaps even for a few steps, find it necessary to walk. Here is the Crusher the day before the race, when it was still asleep: 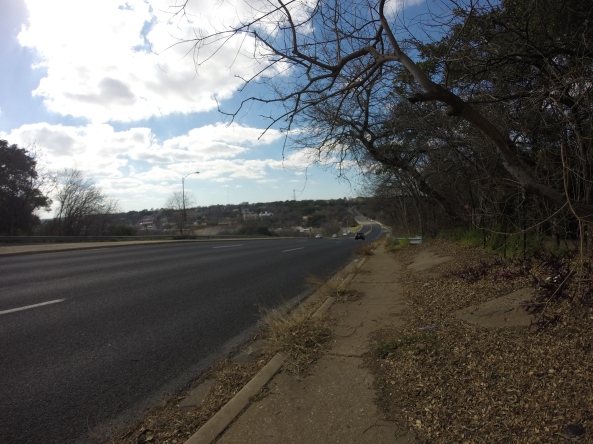 Once you crest the Crusher, there are just a couple of miles left.  The finish is one of the best, turning back onto Congress to the cheers of the throngs, Finish line just ahead, Texas Capitol in the Background. Through the well organized chutes for water and your NXP Medal.  By the finish, it was cold and cloudy. 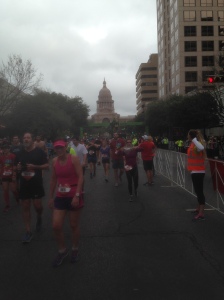 In 2014, my Austin Half Marathon time was 2:16. In 2015, it was 2:12, so keeping in line with the trend, I shaved another 4 minutes off my time, finishing in 2:08, my second or third best Half Marathon time.  S is going the other direction, but that is only because her injury slowed her down somewhat.

What is interesting is that my pace over the entire 13.1 miles remained within 2 seconds of my final pace and S stayed within 11 seconds of her overall pace. That, my friends, is why it is called a pace.

To celebrate, we had the traditional Frozen Margaritas at Texas Chili Parlor, home of the ERA 70X, Number Uno ranked cheese enchiladas in Texas. Time to replenish with beans, tortillas and cheese and start the hunt for the next great race. 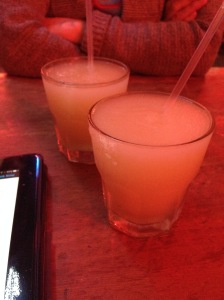 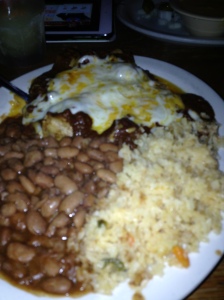 On the RV front, the Norcold annunciator panel acted up Saturday, flickering when it tried to switch from LP to electric, and the rear camera went on the blink again.  We’ll get it into McClain’s this week for the Warranty work, the  Conestoga now sitting at 10,200 miles.

Between the two of us, we are proud parents, Texans, Texas Exes, long distance runners, cyclists, adventurers, a guitar player, a computer programmer, a great cook, a lawyer, an engineer, a physicist, etc. etc.
View all posts by winnebago70x →
This entry was posted in Half Marathons, Marathons, Roadtrip, Runs, Texas, Winnebago and tagged Half Marathon, Roadtrip, Winnebago. Bookmark the permalink.

9 Responses to The Cruelest Half Marathon