It’s a geographical club sandwich. About 10 days ago, we headed to the Western Outpost to work a few days and collect the Conestoga to drive it back to Texas for the winter.  I’ve flown the TX-CA route so many times that I can ignore everything going on outside the aircraft window, and by sensing the amount of time in the air and whether we are taking the S route toward Las Vegas or N route via Mono Lake, tell exactly when we are about to cross Shiprock NM or the Grand Canyon.  Quite a skill to have when the pigmen take over the earth. 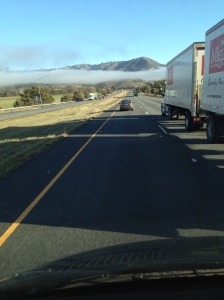 So we loaded up the Conestoga in CA and headed out 10-12 days ago, down 101 from San Jose to 152 East from Gilroy over to Interstate 5. We had a cloud bank to contend with on our way past the San Luis Reservoir. 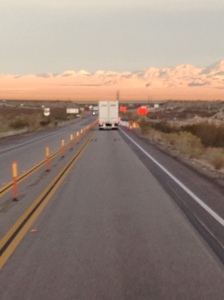 The route is I-5 to Bakersfield over to Barstow and then a descent into the Mojave Desert.  We had some gusty winds 25-30 mph from the east move the Conestoga around on the highway. At Barstow, we hit Interstate 40 for the long haul across the old Route 66 to the Texas Panhandle.

We stopped for the night in Kingman AZ, thus saving us another day of having to pay California taxes. Day 2 we headed into one of our favorite stops, Flagstaff AZ. Flagstaff, which sits at 7,000 feet, can be hit and miss with the winter weather. There were remnants of snow on the side of the road, but the temp was about 60 degrees. We stopped at the Diners, Drive Inns and Dives favorite Salsa Bravo Mexican Café for enchiladas and to watch part of the Texas-Baylor game on the big screen. Texas plays spoiler again. 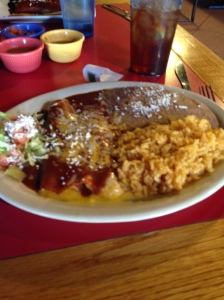 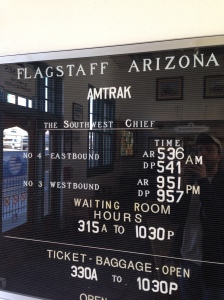 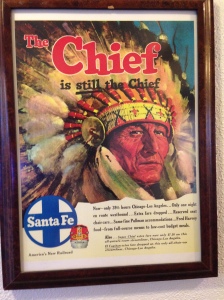 We watched another part of the Texas-Baylor game in the Conestoga at the Flagstaff visitor center next to the BNSF tracks.  When the game wasn’t on, we counted intermodals on the freight trains–a train every 5 minutes or so.  Railroad cross-roads of the Great Southwest. 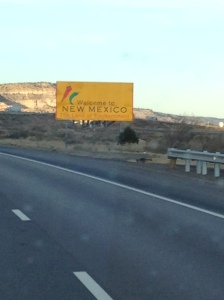 After lunch we made it into New Mexico to spend the evening in ABQ, but first, a quick stop off Interstate 40 to stand on a corner in Winslow AZ. 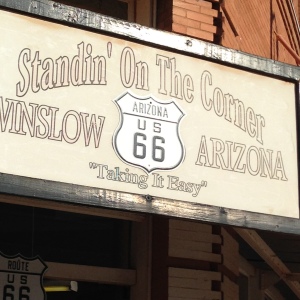 We filled up with diesel, and then made it to ABQ around 7 p.m., just in time to watch the late college football games, including the PAC-12 championship game that was going on just a few blocks from the Western Outpost.  We made reservations at one RV park in ABQ, but we arrived after 6 p.m. and their office was closed. So we headed across the highway to a different RV park that was still open. Unfortunately, the sun had gone down so our Breaking Bad self-guided tour was off the table. Maybe next year when we take the Conestoga back West. 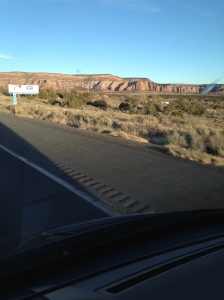 The propane heater in the Conestoga struggled overnight in ABQ as the temp dropped to 25 degrees. We keep a window cracked even in below freezing temps just in case the carbon monoxide detector goes south. By Sunday morning, the LP was at 0, but it was still pumping out some heat.  After hitting an ABQ Starbucks, we were back on Interstate 40 headed East hoping to hit Amarillo by afternoon, but first a quick stop at Clines Corners NM for some authentic, made in China, Indian swag.

Finally, Texas. Home, with only 5 more hours to Dallas via Highway 287.  Exhale and then back on an airplane for another quick trip. To New York City. Broadway shows.  Italian Restaurants. Conference rooms. And a horrible, crummy, inefficient airport terminal, LGA 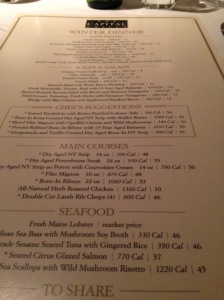 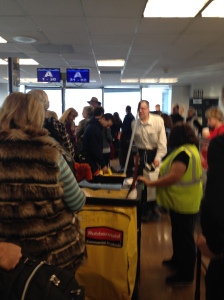 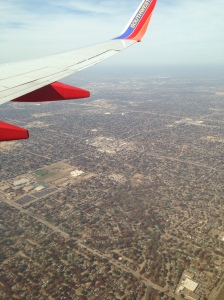 And finally, again, back in Texas today where we managed to get in a 3 mile run at a slow 10 minute pace, because, lest we forget, there is a race in 2 days, where I’ve promised a 9 minute pace. Right.

Weather for Sunday is looking miserable for the 6.25 leg of the Marathon Relay. Rain. Cold. Perfect.

Between the two of us, we are proud parents, Texans, Texas Exes, long distance runners, cyclists, adventurers, a guitar player, a computer programmer, a great cook, a lawyer, an engineer, a physicist, etc. etc.
View all posts by winnebago70x →
This entry was posted in 10K Runs, California, Mountains, Roadtrip, Texas, Winnebago and tagged 10K Runs, Roadtrip, RV, Winnebago. Bookmark the permalink.