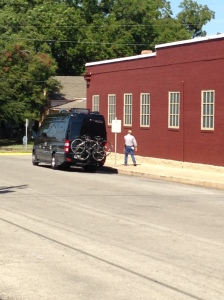 Headed out of Dallas Monday morning, September 14.  As noted in an earlier post, I lost my DL and Debit card on the Guadalupe Trail in San Jose, so on the way out of town, had to pick up a replacement Debit card at the PO Box and get a new Drivers license. We wanted to avoid the traffic nightmare of 380 from McKinney to Denton so we went up 75 to Sherman to the Texas DPS office as the lines are shorter there. Well, this is government, and my number was 65 and they were on number 42. They had two clerks, each of whom spoke very s-l-o-w-l-y.  So rather than wait, we picked up some fried pies and turned the land schooner West on Highway 82 toward Wichita Falls. We decided to push it through to Colorado. We pulled over at the new Pilot in Childress, but the lights were flickering all over Childress due to high winds (35-45 mph) from the West.  Thus the gas pumps were working very slowly. We were able to get 8 gallons into the tank at $2.35 per gallon for Diesel, enough to get further north. The ERA70X does not have an inverter, but rather than run the generator that then powers the 120 Volt outlets, we bought a 300 Watt Inverter to plug into one of the 12 volt receptacles.

No visit to Amarillo is complete without a steak at the Big Texan Ranch.  The steak was tough and chewy (4/10), the service was acceptable, and Zoltair’s predictions were wrong. 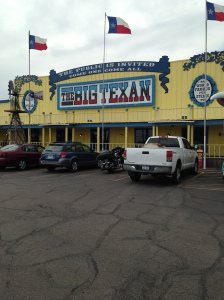 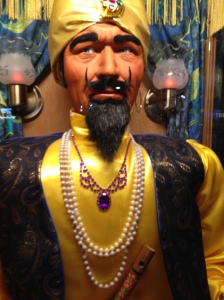 We headed out up 187 to cut the corner of the Texas panhandle through Dumas (time to fill up). Then through Texline, Texas across into New Mexico at about 8 p.m.  I forgot that we lose an hour from CST to Mountain time at the state line, so when the GPS said we’d arrive in Trinidad CO at 9:00 p.m., that is 9:00 p.m. MST, or 10 p.m. Central time. The sun was setting as we crossed the NE corner of NM, getting over the 8,000 foot Raton pass at about 9:00 p.m.

As we were descending, the right front tire pressure sensor wigged out, showing No5.  Well, the manual states that this means there is no sensor. So the concern was that the Tireminder sensor came flying off (not good–$70 each) or that the entire tire and wheel came off.  Well, handling was fine, so I assumed that we lost the sensor or the battery in it went dead.  We rolled along for about 5 miles and at the first rest stop, I got out with the Maglite and checked. The sensor was still there, which was good.  I tightened it down and we continued on. About 2 miles later, the sensor woke up and started working again.  Weird.  Pressure and temp were within normal range.  So we went back to nominal status on tires. Then about 30 minutes later, the same thing happened with the left front tire! We ignored it, and soon enough, about 5 miles later, the sensor (pressure and temp) can back alive. It all appears to be working fine now. Maybe that is a topic for RV.net.

From there, we hit I-25 and headed north to Colorado Springs CO, by midnight.  Rather than crash an RV Park, we found  24 hour Wal-Mart with several RVs in the lot, checked with security, and they confirmed we could boondock there. Which we did. Midnight shoppers at Wal-Mart are generally a weird breed. That now includes us.

From the Wal-Mart to Manitou Springs is a short 5 mile drive.  On Tuesday morning, we found a great diner for breakfast, Karma coffee, on the main street. 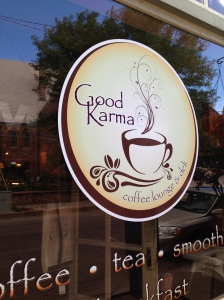 While at breakfast, we decided to call around to the local RV parks to see what was available that night. Pike Place RV Park gets great reviews. We called and talked to Margie there and found out that 30 amp service was available. We told them we’d be there in 20 minutes and when we arrived to have Chris welcome us by name (though we’d never been there before) and he led us to our spot (26) next to the babbling brook. They were very hospitable and gracious hosts.  We unloaded the bikes and headed up the street toward the Cog railway and Incline. 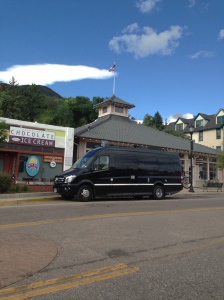 So sitting behind the wheel of a Mercedes Benz Sprinter is not much exercise. But training must continue for the RnR San Jose Half Marathon (which I still need to register for).  It is in 12 days (gulp). So, the big exercise activity for the week is the Manitou Springs Incline.  It is a 1 mile hike, 2000 feet up, with a 4 mile hike back down the Barr trail.  About 2/3 of the way up, there is a bail-out spot to the way down at a false summit.  The lack of oxygen and the exertion takes a toll, but we made it to the summit in about 1 hour 15 minutes.  Physically, it was as exhausting as a 1/2 marathon. We started at the RV park at 6,400 feet, and at the top of the incline were at 8,600 feet. 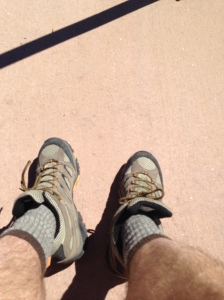 On Wednesday, September 16, we broke camp, and headed out of the Pikes Place RV Park to catch the 9:20 a.m. Cog railway to the summit of Pikes Peak.  First stop, Starbucks–Venti Blonde Chai tea latte, with bakery goods.

It is an hour up, from 82 degrees F to 32 degrees F (windchill 15 degrees F). Great views from the top 150 miles in each direction.  Highly recommended are the donuts they sell at the summit.  Not great for the training regime though. 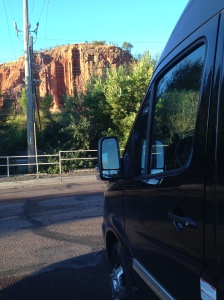 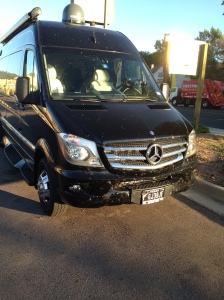 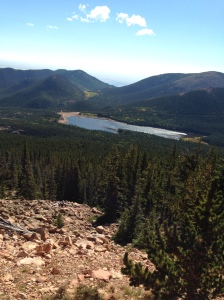 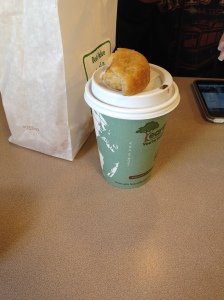 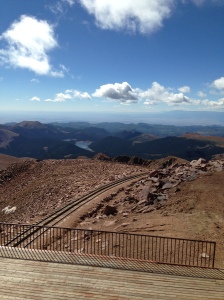 After coming back down, took a conference call at 1 p.m., and then headed out toward Denver.  While we had plan to go North through Denver to Cheyenne then Yellowstone, the weather there looks bad this week–40 degrees and cloudy. So we have decided to cut West to Salt Lake City, UT.  That meant taking the outer loop 470 around Lakewood CO to I-70 West. Leaving the front range of the Rockies, we turned the Schooner West up to the Eisenhower tunnel at 11,100 feet, through the Rocky Mountains across the Continental Divide into Vail for the evening at a condo. A future post will address Mountain driving (6-7% grades) in the MB Sprinter. But it seemed to operate best, on the descents, in 3rd or 4th gear to maintain the proper speed, at about 2,500 rpm.  Just a slight tap of the breaks from time to time kept it under control. I kept an eye on the tire pressures and radiator temps. To be absolutely safe, we turned off the AC from time to time not to overly tax the engine. It was 62 degrees in the mountains, so it was a comfortable ride with the windows open halfway. 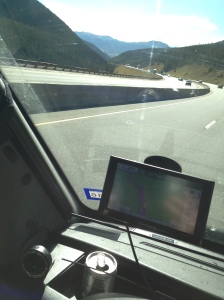 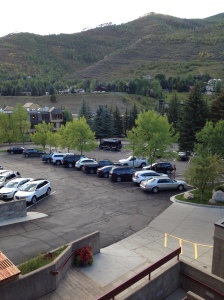 Between the two of us, we are proud parents, Texans, Texas Exes, long distance runners, cyclists, adventurers, a guitar player, a computer programmer, a great cook, a lawyer, an engineer, a physicist, etc. etc.
View all posts by winnebago70x →
This entry was posted in Roadtrip, Winnebago and tagged Roadtrip, Winnebago. Bookmark the permalink.